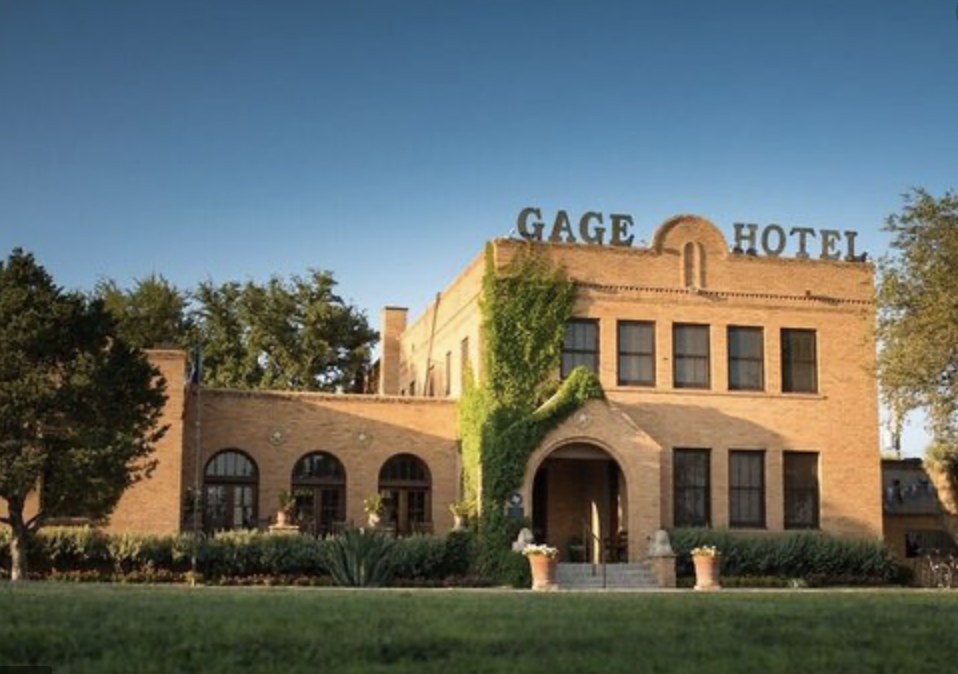 The town of Marathon came into being with the coming of the Texas and New Orleans Railroad in 1882 and soon became a center for ranch and mining operations, and market for sheep and cattle.

Gage built the hotel because of the lack of sleeping accommodations available in town. One room was reserved for Gage which also double as his office. Gage died one year after the hotel was opened. Upon his death the hotel and 500,000 acres were given to his daughters.In 1882, Edward Gage and E.M. Powell formed a partnership to purchase 2,000 cattle and the Running W Bar brand from George J. Reiger. Gage moved to the Big Bend area to supervise the ranch. Then a year later the partnership was dissolved.

Gage stayed in the cattle business and formed a new partnership with a group of New England investors. The new organization was called Presidio Live Stock Company. Alfred Gage the young half brother was the manager.

The mid-1880s was a rough period for the ranch. Two years of severe drought followed by the harsh winter of 1885. Edward tried various plans to keep the ranch going. Even opening a mercantile store in Alpine, with half brother Seth Gage. In 1892, distraught over the business, Edward killed himself in the washroom of a Chicago railroad station.By 1897, the family had merged all holdings into the Alpine Cattle Company, under A.S. Gage’s management. The ranch enjoyed great success over the years.

Today the ranch is called the A.S. Gage Partnership, Ltd and is still controlled by the family members. In 1928, a number of Marathon towns people got together to see what could be done about building a hotel. Since Mr. Gage had the greatest property holdings, half the cost of this hotel was to be financed by him.Mr. Gage hired the firm of Trost & Trost to draw plans for the hotel. The plans called for two stories with a single story on the west. Textured buff brick were used on the exterior of the structure. Oak floors and beamed ceiling were incorporated into the lobby. The Ponsford Brothers of El Paso were the contractors.

The hotel opened on April 1, 1928. Mr. Gage used one of the rooms in the hotel for his office. Mr. Gage died in July of 1928.Mr. Gage believed that he would never recover the money he invested in the hotel, but according to the managers of the hotel it paid off from the start. The hotel was eventually closed and began to deteriorate. In 1982, J.P. Bryan purchased and restored this historic building.

The newly updated hotel offers guests an oasis of laid-back luxury with quality accommodations, food, and amenities amid miles and miles of unspoiled stunningly beautiful Texas landscape. Beyond the property, the town of Marathon serves as the quintessential Texas backdrop for the Gage Hotel, complete with charming shops, country churches and local eateries all within walking distance of the hotel. Ideally situated in the region, the hotel serves as a base for day excursions to the Big Bend National Park and surrounding attractions and activities.